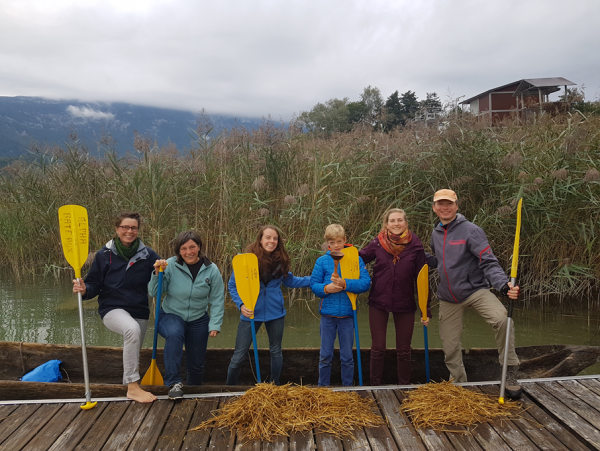 After the regatta in Attersee, Austria, Xiphia, our prehistoric dugout canoe stationed in Sutz, went to Aiguebelette in Savoie (France) in September 2017 to participate in "La Grande Traversée". This major event was organised by the Communauté de communes du lac d'Aiguebelette and supported by the Conseil départemental de Savoie, Savoie Mont Blanc Tourisme, the EDYTEM laboratory of the University of Savoie and the DRAC Auvergne-Rhône-Alpes under the aegis of the UNESCO Palafittes coordination group. A festive, fun and sports programme enabled the discovery of the cultural and natural heritage of the lakes of Savoie and the Jura over three days. Local archaeologists built two dugout canoes for the occasion. Some thirty local and international teams took part in the event, including members of the Japanese national rowing team, who had just come to train in Aiguebelette. As in Attersee, Xiphia was the fastest, leading a team of bold Slovenians to victory. The organisers welcomed over 2500 visitors: a real success!