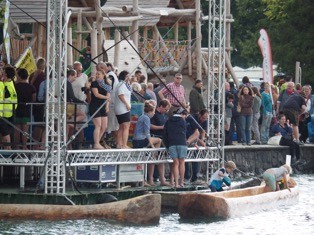 After having organised the first dugout canoeregatta (replicas of prehistoric models) on Lake Biel in the spring of 2014, the NMB New Museum Biel and ArchaeoConcept proposed to organise the first international pirogue regatta in spring 2015. This event is part of a global desire to promote the pile-dwelling sites around the Alps that are listed as UNESCO World Heritage sites. In 2016, Austria organised the regatta in Attersee. In order to find the funds needed to transport the Xiphia canoe and the Swiss team, we set up a first archaeological crowd funding campaign with the project "Pirogues Ahoi!

With the money raised, the team was able to travel to Austria and bring the dugout canoe! The trip took place on August 6th and the regatta took place during the lake festival (Seefest) on August 7th 2016. The festival allowed many archaeologists and archaeological institutions to show the extent of their research and their work (specificities of pile-dwelling archaeology, specificities of local archaeology with the presence of salt mines, reconstructions, valorisation, etc.). The event was a great success, with 35 teams competing in an agility race that day. Luckily Xiphia was there, as the second dugout canoe provided for the races was not at all stable; without her, the races would have been much less spectacular. The festivities ended with a prize-giving ceremony and a concert.