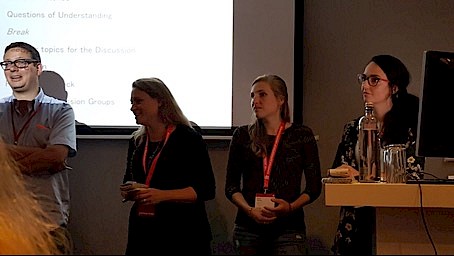 In September 2017, Ellinor Dunning and Aurélia Basterrechea presented the Site of the Month project at the session "Telling World Heritage Stories: communicating archaeology to local communities and tourists at European World Heritage" with an intervention entitled "New issues in Switzerland: letting the archaeology speaks through local communities". The aim of this session was to present the Site of the Month programme as functioning in a similar way to UNESCO World Heritage on a national scale, highlighting the role of local associations. This conference developed communication methods and new projects (social networks, 3D objects, archaeoCaching, archaeoTour). This presentation was particularly well received and was the subject of several questions from the audience present at the session. The fact that ArchaeoTourism works with local actors and does not physically intervene on the sites was particularly welcomed.

Cynthia Dunning Thierstein organised a round table discussion with Sanjin Mihelic, Director of the Archaeological Museum of Zagreb, on the vocabulary used in archaeological tourism: "Do we speak the same language? For a constructive dialogue between tourism and archaeology". This round table included several presentations, followed by a discussion on the need to know and above all understand the vocabulary used by each partner, but also their objectives.

The fourth intervention of ArchaeoConcept was a lecture by Cynthia Dunning Thierstein and Ellinor Dunning "Who needs whom? Interrelations in the construction of knowledge in the post-colonial context of the United Arab Emirates" presented in the session "Post-colonial Archaeologies". The aim was to take a critical look at the role of foreign experts in the context of heritage consulting.