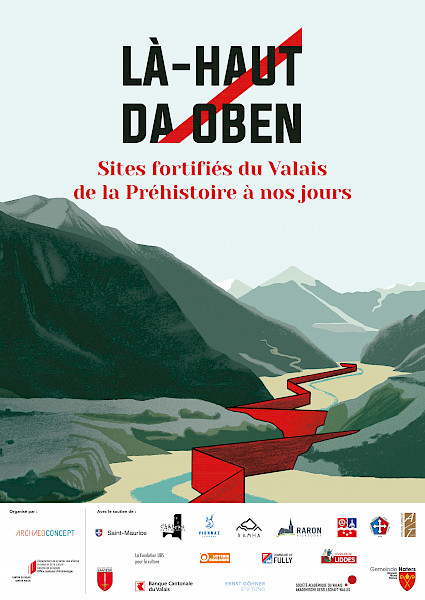 The exhibition "Là-haut/Da oben, sites fortifiés du Valais de la Préhistoire à nos jours" ends its journey at the Arsenaux in Sion from 5th of September to 1st of December 2022.

After the World Nature Forum in Naters and the Castle of St-Maurice and the old Saint Peter's Church in the town of Leuk, the bilingual exhibition "Là-haut/Da oben, sites fortifiés du Valais de la Préhistoire à nos jours" , conceived by the Cantonal Office of Archaeology (OCA) and organised by ArchaeoConcept, will be shown ine the Arsenaux in Sion from the 5th of September to the 2nd of December 2022. The exhibition summarizes the last decades of research on the fortified sites of the Valais for the general public.

Its closing will take place on Wednesday 7 December at 6.00 p.m. in the Arsenals with a lecture by Romain Andenmatten on "Defence in the Alps and the genesis of the Là-Haut / Da Oben project" (in French).

In 2016, Werner Bellwald and Philippe Curdy, then director of the Caverna cultural centre and curator of the Valais History Museum, formulated the idea of a project to talk about the defensive heritage of the Valais through time and the defensive structures erected on the Alpine territory. In order to give the project a cantonal dimension, the Cantonal Archaeology Office became the main sponsor in 2017.

From prehistoric palisades to the kilometres of tunnels dug during the Second World War, not forgetting the Roman fortifications at high altitude and the castles still visible in ruins on either side of the Rhone plain, the Valais is home to a large number of sites that were equipped to ward off the potential dangers of their time. With the geographical particularities of the canton, between the plain and the mountains, and the diverse nature of the research that has been carried out on the territory for nearly a century - ancient excavations, chance finds, ancient texts, archaeological investigations and historical works - the Cantonal Office of Archaeology (OCA) proposes a synthesis for the general public based on a selection of sites that are representative of their time: the Neolithic sites of Heidnischbühl (commune of Rarogne) and Colline de la Soie (commune of Savièse); the site of the Metal Ages, Scex-Rouge (commune of Fully); the Roman fortification, Hannibal Wall (commune of Liddes); the two medieval sites of the Cornillon spur (commune of Vionnaz), and the Château de Beauregard (commune of Chippis) and the fortress of Naters (commune of Naters) from the Second World War.

The bilingual exhibition "Là-haut / Da oben, sites fortifiés du Valais de la Préhistoire à nos jours", which started in Naters at the beginning of July 2021 and was presented in the autumn at the Château de St-Maurice in the lower Valais and returned to the German-speaking part of the canton in Leuk. It will now continue in the Valais capital of Sion until December 2022.

In order to illustrate the different built monuments taking place on the Alpine reliefs, original models of the above-mentioned sites are presented. Financed by the municipalities concerned, they are accompanied by a selection of objects discovered on the different sites. Produced by Hugo Lienhard, a model maker who has created numerous reproductions of historical sites, it allows visitors to immerse themselves in the past from prehistory to the Second World War.

A book for the general public in two languages

The third book in the OCA's general public collection, after "Sion, une ville immortelle" (2016) and "Sous-le-Scex, millennia of history at the foot of Valère" (2020), the publication "Par monts et par vaux, sites fortifiés du Valais à travers le temps" brings together the contributions of a dozen or so recognised specialists. In addition to the sites presented in the exhibition, readers will discover numerous other sites spread out over the canton and over time. Richly illustrated, it is available in French and German.